I have read a book from Carla de Guzman before, and it was for a blog tour. It was a novella set in Paris, where the lead character came in contact with a paranormal pristine yet corybantic painting. I was so engrossed by the story telling that I made sure that I rated it as a 5 star read. So when I saw the opportunity to participate the Backlist Revival Tour featuring another book by Carla, I hopped right on the train and devoured the book right away. 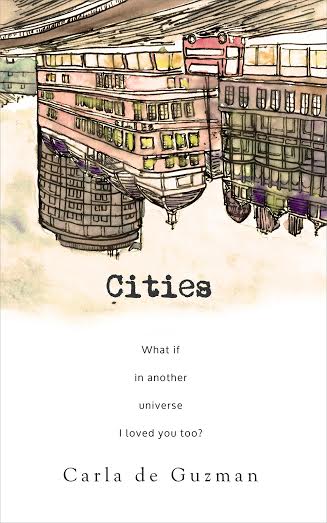 Source: e-book, provided by the author

Summary: Celia has dreams.
She dreams of going to Seoul for that scholarship she never took, of leaving everything behind and moving to New York.
In all those dreams, she finds herself attached to Benedict, the boy she has always loved, who didn’t love her back.

Ben believes in parallel worlds.
Worlds where the things you didn’t do come true—worlds where he went to London and fell in love with Celia, where he shows up on the day she needed him most. He believes that dreams are glimpses into that parallel world, and it’s not a coincidence that Celia’s been having them too.

It’s the day of Ben’s wedding, in the middle of a typhoon in Manila. How will these dreams and unmade decisions change their lives? Will they bring them closer together, or just drive them further apart?

Per usual, the feeling that Carla’s books has left me is the craving to devour more of her works. I had some issues, but they were fairly easy to manipulate whilst reading the novella. I love everything about the book, especially since I can relate well to the main character (by the means of feelings, guys. I am only 18.) Nevertheless, this book has a lot of what if’s and maybe’s. And has delivered one of the most satisfying endings that I have read since… movies.

A fluffy and heart string – pulling story about what if’s and maybe’s. Anyone can fall in love with this story that revolved around Celia and Ben’s belief of the parallel universes. I am trying my best to not sound biased, because let’s face it: I’ll gush about anything I read that was written by Carla de Guzman. Let’s start with a little bit of the faults. (I thank Chandler Bing for the helpful gifs.)

It can be expanded.

It’s just that it all happened so fast, which is actually a good thing. Yet, it felt like some of the chapters were really rushed. Some of the cities in question could have had been expanded into several chapters and several line breaks. As a reader, I thought that I was still on the same page as the characters and then I’m not. It got a little bit confusing, especially since it was a book that was filled with a whirlwind of actions. (Probably just my copy, though.) It could have used more chapters around London, or Hongdae, and even Manila.

Vivian and Henry could have had an arc of their own.

Maybe… just maybe. Henry and Vivian were two important pieces of the puzzle. In every parallel universe, their personalities seem to differ. Yet, they stayed the same complex characters that will create one or two conflicts in every parallel world. In the sense, they probably have their own parallel world, too.

But that’s just my issues. Mostly with the format but here is my gush.

The story was bittersweet, yet extremely satisfying.

No spoilers, but it is right to say that the ending was extremely well thought out for me. Any person with a clear and rational mind will always end up with that ending. We may think about this and that, but in reality, it is what we stick with. Many will probably disagree with me, but it is for the best. Sometimes, when we incorporate real life scenarios into books, it is usually disastrous. It leaves barely little room to the imagination. But this one made the best choice.It could have gone one way, but it went for the best way. I may be redundant here, but I swear it was satisfying.

Multiple parallel universes are too underrated.

I have been enlightened about the concept of multiple universes. The trend has been there since forever, but not many could manipulate it to their use. And darn, did someone nail it again. Despite being confused when it was first introduced in the novella, I immediately grasped the concept. It was refreshing to read different perspectives and new personalities to each character every chapter.

The writing was simple, yet very elegant when it comes to describing the “city” in question.

What I like about this novella is the easy to absorb writing. You will immediately fall in love with this book in a heartbeat because of the beautiful description of each city. I visited the streets of London, Hongdae and New York without leaving the comforts of my temporary bed. And it also helps that story was narrated through third person, because 1) we don’t get a lot of those, and 2) it’s the best way to go.

May I have some more?

I do this when I finish a wonderful book. I go and do an Oliver Twist voice because I want more. Not only did the book gave me wanderlust, but it also left me an inspiring message of knowing how to let go of what you love. That what may seem can or cannot be, yet somehow it could. But will it?

Carla de Guzman is the most gush-able author around.

Employee by day and writer by night, this blog is her free space to post things about her travels and her adventures as a self-published author. She is a proud part of #romanceclass and loves supporting Filipino authors and artists.