Welcome to another stop for the Enlightenment Blog Tour hosted by Kate at Your Tita Kate. As a giddy fangirl game and all up for Philippine myths and legends, I was beyond excited to participate in this lovely tour. As such, this book promises a whole lot of action and your much needed dose of magical realism. With the modern take added on creatures from our own, it is easy to gravitate and appreciate this story.

While I will not be sharing my full thoughts on this book, I will be sharing an excerpt for you, dear reader. Read on to get a glimpse of the world behind Enlightenment. 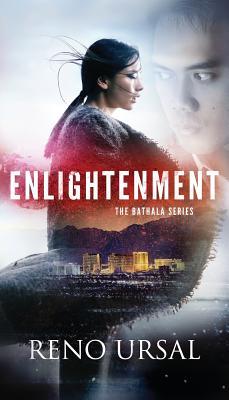 Series: Book One of the Bathala Series

Buy it on: Amazon | Barnes & Noble | The Book Depository

“Enlightenment” is the first book in The Bathala Series, inspired by the beautiful folklore of the Philippines. This is the coming of age journey of Filipina-American Dorothy Dizon and transfer student Adrian Rosario, who teeter between friendship and intimacy throughout the novel.

“Enlightenment” introduces Dorothy as an 18 year old high school student in the United States, learning through Adrian about the mysterious folklore that binds them to the obscure history of the Philippines. She realizes that supernatural forces are no defense for a consuming love, a love that has her lean on her best friend for support, the beautiful Stella De Guzman. Adrian is a blood-eating Danag warrior sent to protect Dorothy from unseen enemies of his secret society in the Philippines, a society that changed the course of history prior to Spanish colonization. Adrian’s doubts about Dorothy are put to the test until the final moment when he feels a connection he could never predict. Together, Dorothy and Adrian experience a metamorphosis of historic proportions, a metamorphosis that changes their souls.

Living among humans wasn’t bad, except for having to protect a girl in Sin City. What happens in Vegas stays in Vegas.

The casinos easy money was impossible to access when pretending to be an eighteen-year-old kid. And since eighteen-year-olds aren’t allowed to gamble in Vegas, I was out of luck. The adrenaline rush came from defeating the odds. My ability to predict the probability of things was considered a subtle intuition for my kind. But in Vegas, I could profit from the casinos and return home with something to talk about. Stupid human laws.

It wasn’t about making money, the most useless invention ever created. The greenback a valuable commodity? Anyone with half a brain knew money was simply pictures and numbers printed on paper! From trees! The real commodities were platinum, gold and silver stored deep in earth’s core. But humans still hadn’t realized the value of utopian wealth. Society’s sense of value was strictly tied to one’s annual gross income.

The row of lockers shook when I slammed my locker door. As the vibration dissipated, a nervous energy resonated behind me. The girl. Dorothy’s crooked smile disappeared as soon as we locked eyes. Based on the extra shine reflecting off her forehead, she looked like she was perspiring. Her hair was in that same ponytail—her bangs now to the side—giving her a different glow than yesterday. She walked past me athletically, her hair bouncing with each step. The smell of artificially flavored berries lingered in the air from her perfume.

Conscious of my strength, I ground my teeth to keep from overwhelming her. Dorothy looked back and our eyes connected again before she entered her first-hour classroom, not bothering to look back at the door.

I stared at the hallway’s linoleum floor, wishing I had the willpower to balance my energy. I hadn’t given her enough space to perceive me without feeling a connection. Yet she smiled at me. Didn’t she? Why did she look away when I smiled at her? My influence over emotions should have affected her, but she had the strength to break free. Maybe I pulled back too much?

And that’s when an staggering frustration overtook me. Humans were emotional, crying and whining over things like money and love. History had proven mortals didn’t know the true significance of their existence. And now, after the nightclub incident, Dorothy had somehow tapped into her ancestry that humans would consider to be a Filipino cultural one, not able to see that race was a facade that hid our truest form. There was no doubt the truth would shock them.

But it wasn’t my place to argue over the human condition. The only thing to worry about was protecting Dorothy Dizon. She had nearly suffocated a guy at the club, which sent signals to us in Mandalagan. Now I had to stay focused in case Sitan had received the same signals.

She glanced into her chemistry book as her teacher closed the classroom door. I went on to my class a few doors down, still wondering how she managed to look away from me in the first place.

Reno Ursal is a Filipino American author who received an English B.A. from The University of Michigan and resides in Northern California. He is the epitome of a familiar U.S. immigrant story when his parents moved to the States from the Philippines (by way of Guyana) in 1974 in search of a better life. He grew up in a small Northern Michigan town as his parents established themselves in their new life. His summer trips to Cebu kept him connected to his Filipino family. The hikes up the mountain from his ancestral home in Catmon had his imagination swirling with ideas, especially with the legends of duwendes and other creatures of Filipino folklore.

Reno was an active reader growing up and started writing during his participation in the Huron Shores Writing Institute in high school. When he took an Asian Pacific American Literature course taught by Dr. Stephen Sumida at University of Michigan, the idea of writing a Filipino American story stuck at the back of his mind. Life moved fast after college. He met a girl named Lynette in California. They married in 2000 and became proud parents of three 2nd generation Filipino American children. He had a full-time job and less time to write, but found time burning the midnight oil. His first novel “The Three Promises” was written when his kids were babies. This novel is currently an unpublished novel, but spawned the hunger to write another novel entitled “The Last Remaining.” Many drafts later, the title changed to “Enlightenment.”

Want to discuss more about Philippine myths and legends? There will be a Twitter chat on March 30, 2019 just for this lovely book. Mark your calendars and join in on the fun!

Have you put Enlightenment on your TBRs yet? What books with rich fantasy settings derived from myths and legends have you read?