I am not mad. I am just disappointed. Next to Deadpool, this movie was one of the few that I was anticipating for 2016.  I would not say that it was a lucky shot, but if you catch a film on the first day of the release, it is something to boast about. And then there’s Suicide Squad. I did not hate it. But I did not feel like I should love it either.

Figuring they’re all expendable, a U.S. intelligence officer decides to assemble a team of dangerous, incarcerated supervillains for a top-secret mission. Now armed with government weapons, Deadshot (Will Smith), Harley Quinn (Margot Robbie), Captain Boomerang, Killer Croc and other despicable inmates must learn to work together. Dubbed Task Force X, the criminals unite to battle a mysterious and powerful entity, while the diabolical Joker (Jared Leto) launches an evil agenda of his own.

Suicide Squad is not a bad movie, but it has the fair share of low points. I want to start with the positive notions first so that we can weigh in this movie.

What I liked about it:

The connection with the DCEU. You’re in for a treat. The film features an array of cameos that will make your fanboy/fangirl hearts in a flurry. It means that Suicide Squad is not a movie of it’s own. It answers the question on what is happening to the DC world after Batman VS. Superman.

The unique cast. That is what Suicide Squad is all about. The characters were represented perfectly. Thumbs up for the actors portrayal of Deadshot, Harley Quinn, Amanda Waller, El Diablo, Katana, Rick Flag, and Killer Croc. The Joker is so-so for me, because I need to see more if I want to make a full judgement. The cast had this chemistry that manifests itself in the screen. They really are a band of misfits that fit together, with perfectly cast actors who did them justice on the screen.

The hidden plot. If you are going to see the movies expecting it be like the trailer, then you’re in for a ride. The creative marketing that they did for this movie is unique enough to please every age. I did not expect that one character caused all of that chaos and mayhem in the movie. It was brilliant in the sense that they got to hide elements of the story and they still got to deliver a solid plot. 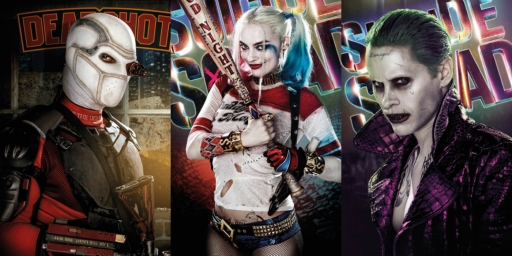 The misleading marketing. A character (or characters rather) is barely in the movie. It got people to expect something and it gets them a whole bag of worms. I am one of those people. And by watching Suicide Squad, waiting for something to happen, it did not sit well with me. Why market a character if he barely speaks?

The fast-paced, head scratching story line. Suicide Squad is unique because of the story, bad people doing something that they don’t even want to do in the first place. But it was crammed in really fast. The movie got to the point where we do not know what was going on. Some even said that they needed subtitles. Is this DC’s thing? Do they only release the good stuff on the extended editions?

The editing. *insert facepalm here* How much slow-motion is too much slow-motion? Why on earth did you have to make it feel like the movie was one huge megamix of songs? In some cases, it felt like the editing was rushed and compiled in a certain way that was a little disruptive. I left the theater thinking that the editing department spent more time making the credits than the actual film.

DC, please lighten up. Maybe just a little bit. I respect David Ayer’s creativity and honestly, he did a great job on some of the main aspects. Maybe you guys should have let him do what he wants to do and direct a kick-ass movie without the kryptonite you pushed on him.

In retrospect, Suicide Squad is a guilty pleasure movie. On some days, you might like it. On some days, you may hate it. At least get in the average. If you want to watch it, it’s a good stress-reliever movie. But in my case, I wish the theaters gave a 50% refund for my ticket because my expectations were so darn high.

Images via Screen Rant and sdccblog.

All of the opinions in this blog post are mine.